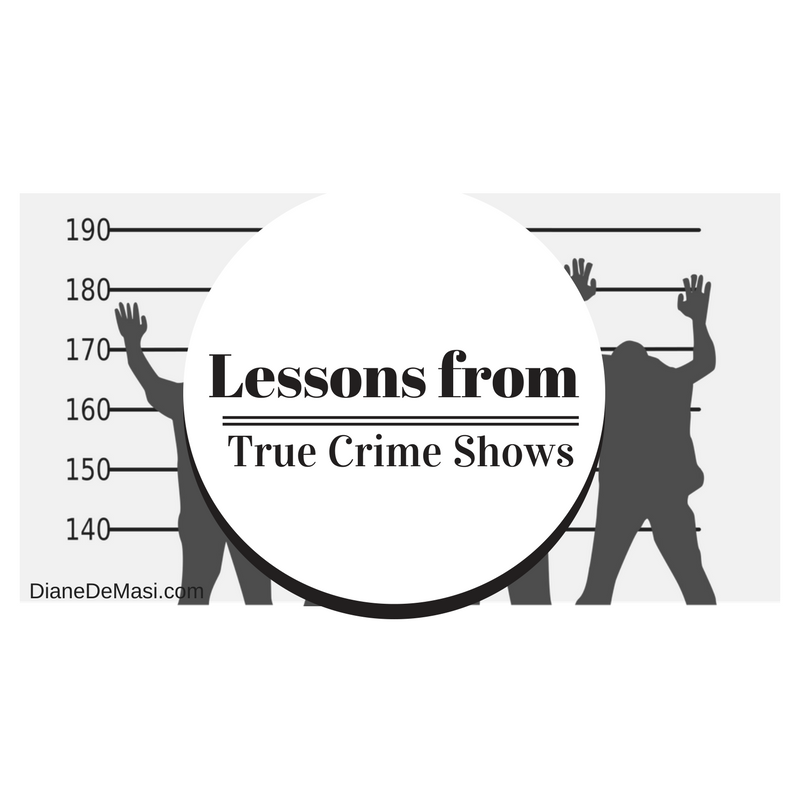 The first lesson I’ve learned from shows such as Snapped, Fatal Vows, The Wife Did It, How (Not) to Kill Your Husband, is that there is a reason police suspect spouses first. Many of these true crime shows focus on the downfall of a marriage. The common denominator being that one spouse believes murder is a better option than divorce.

After the common denominator, the reasons vary from greed to lust. Murder seems like the best option because

The scary part? There are enough of these murders to fill up seasons upon seasons of these true crime shows. And that horrific revelation leads us into today’s lesson.

You Are Suspect Number One

Since it’s usually the spouse, significant other, fiancée, boyfriend, girlfriend, or some other passionate pairing, understand that if anything ever happens to your loved one, you are suspect number one.

Have Patience with the Police

If you truly didn’t do anything to your spouse it will be heartbreaking and horrifying to know the police will first assume you are the culprit. Bring as much patience as you can because you will be interrogated relentlessly. They are doing this to bring justice to your deceased loved one, not to make your day worse. If you are angry, don’t take it out on the police. Instead, loathe all the nefarious people that have previously offed their loved-ones, they are the reason you are suspect number one.

It won’t matter if you sustained injuries in the attack. The police will still question you.

It won’t matter that you swear you and your spouse are the happiest people alive. The police will still look deeper.

It won’t matter how airtight your alibi is. The police will still check your bank records.

These issues do not matter because they’ve seen it all. From the spouse who bashed her own head against a dresser to make it look like her husband beat her, to the guy who shot himself in the leg in an attempt to defray suspicion. From the couple who swore to love each other until death did them part and one departed because they lost that loving feeling, to the couple who didn’t fight verbally but did so with vicious words on sticky notes all around the home. From the woman who was 4,000 miles away when her spouse died from a ‘robbery gone wrong,’ (hit man) to the man who was at the bar when his wife ‘drank poison’(he spiked her evening tea bag). The police have seen and heard it all.

You are suspect number one and everything will be looked into – so if you hate your spouse divorce them. Murder is not good. You will get caught.

Do not kill for love. The guy you love, who convinced you to kill his wife, may do the same to you later on.

If you are feeling ill, get your blood tested. Don’t trust your spouse, your in-laws, not even your children.

If you have money and some random person falls madly in love with you, don’t sign an insurance policy before your marriage.

If your spouse takes out an insurance policy on you that is worth more than you make in a year, don’t turn your back on them. And don’t eat what they serve, and don’t fall asleep.

Not being paranoid or anything, but everyone you don’t know and, especially those you do know, is out to kill you.