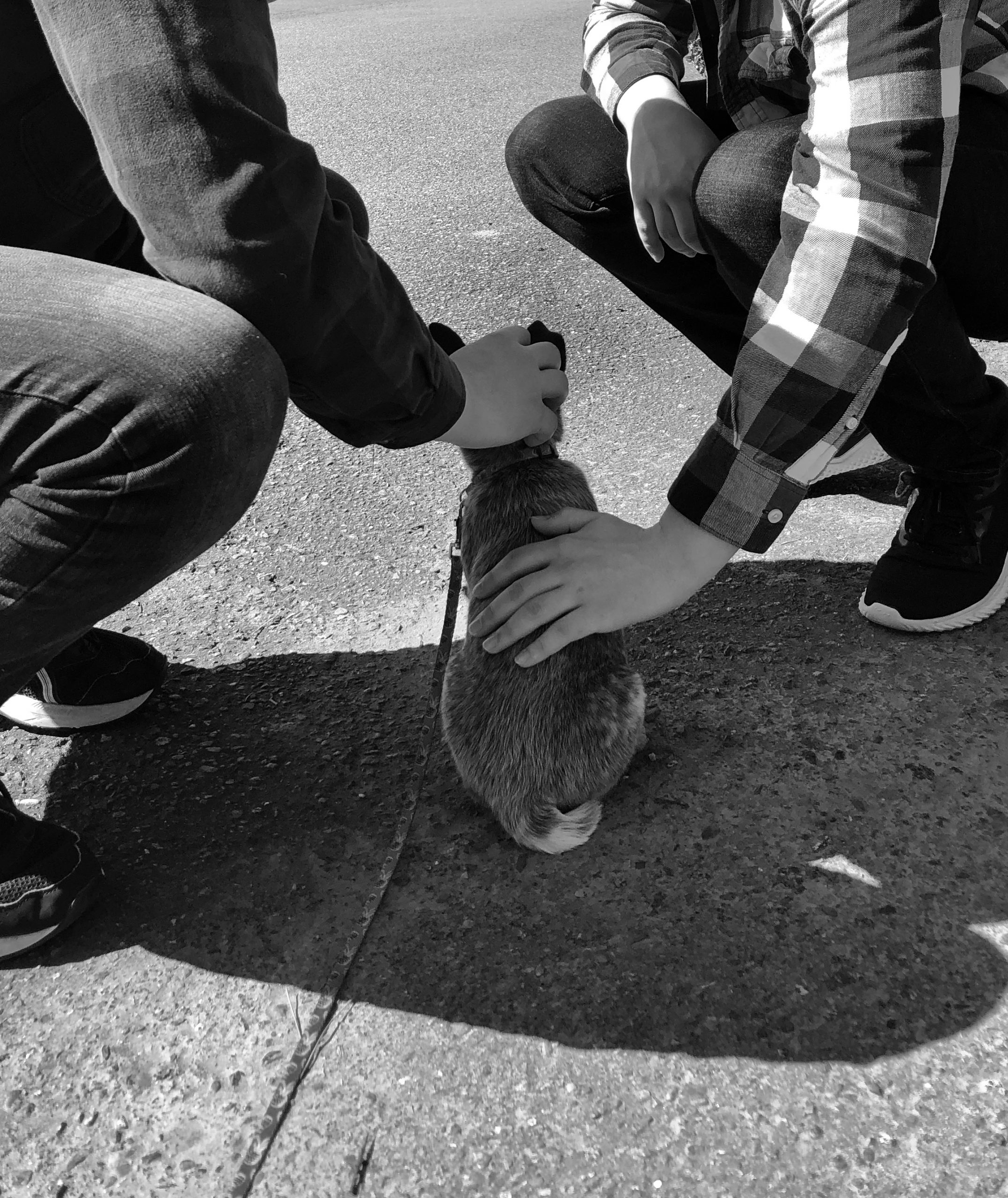 Picking up our new puppy

Adding a new puppy to our household wasn’t the most planned event. My husband likes dogs, but he was done with them when we got a wild child early in our life as husband and wife. If you’ve ever watched Funny Farm with Chevy Chase, we got dog one. Our dog number one was later re-homed to a family with other dogs and massive property.

So when my husband texted me he was at an account with a bunch of cute puppies. I thought nothing of it. The next day he was back at the account and he texted that the puppies were all cute, but one was really cute. Something in that text stood out, a soft spot. A little something more than just a “cute puppy.”

When he told me about the puppy that evening. I could tell that he was leaning toward this pup. The next day he told me I should come down and see them. So I did. Up until the moment I touched the puppy, I was thinking this was something my husband wanted. As my fingers brushed her fur while I went to scoop her up, it was over. I was in love. One-touch, sold!

We waited for five days to bring her home. Impatiently waited. Yes, I was the most impatient.

Day One with our new puppy

We brought our new puppy home on Friday, March 27th. Her name is Pandora. We are all suckers for her little eyes. How can we not be? The look at the end of this Instagram video – heart-melting!

Day one went well. Much better than I anticipated. The five days I waited to go get her, I started watching YouTube dog training videos. I watched other people with their Blue Heelers (Australian Cattle Dog). I devoured it all and am making the best effort I can to start off on the right foot.

The lady we got Pandora from had already started training her to “sit.” We are incredibly lucky that she seems to be doing that all on her own, even at the door before we go outside.

We began working on “Leave it.”

First day home we ooh-ahhed and molly-coddled her. We let her sleep with us. This wasn’t fully intentional. We didn’t have a crate. Amazon is overwhelmed right now so the crate wouldn’t arrive until the end of April.

So we figured “why not?” Thankfully, the next day I was back on Amazon and ordering the kennel. We have a cat crate that she fits in, so we’re saying a prayer that the crate will hold her until the kennel gets here. Nothing bad happened the first night, she was super happy and did fabulously. I took her to bed at 11:00, she woke for a potty break at 4:20 and then back to bed until 7:30 am.

Another great day, but I made a note, that I’m going to have to leave her alone at some point. Right now, I have her by side all the time. I get the kids to watch her while I shower or grab a bite to eat.

Her favorite activity so far is the pull toy.

The second evening went well enough. We put her in the crate, she whined and then screamed for about 5 minutes before settling into a whimper and finally asleep. She slept until 5 something and then we did potty break. Then she slept until 7:30.

She is getting better with “leave it” in an undistracted environment.

She entertained herself for a few minutes. So proud of her.

We have progressed more with “leave it” and she is taking a bit better to the leash.

The Third Night with Our New Puppy

I must remember she is still a new puppy. She has been doing well, but she spoiled me the first couple of nights.

Last night we (Pandora and I) were up at 3:00 and 5:20. She went back to bed fairly quickly after the three in the morning potty break. Not so quickly after the 5:20 break. I got her to rest for a little over an hour and napped at the same time. Final wake up call 7:30.

She has been sluggish this morning. Growth spurt? Too many training snacks? Ate something she shouldn’t have outside. She’s a cross between a Dyson on steroids and a goat. She can suck up anything in the blink of an eye and doesn’t care whether it’s edible or not. I’ve fished rocks, twigs, weed tree seedlings, deer droppings, and moss from her mouth.

She’s been stealing the cats’ toys and I had to do a Google search to make sure all the catnip she inhaled is okay for dogs. Apparently, it’s fine, it acts as a tranquilizer. Maybe that’s why she’s sleeping so much?

As I started this post I was concerned that maybe she was sick, but since that point, she has gone on a major tear. She had me running in the yard (good exercise) and I have her on a leash because I’m trying to nix all the nibblings. The little land shark attacked my boots. They aren’t even real Uggs, just some fake ones. But apparently, they are super awesome to attack. Things started getting chaotic with her running over, ripping at my boots and then dashing off and trying to grab anything to eat (I feed her plenty). I tugged on the least a few times before I tried “leave it.” That was successful twice, so we’re making progress, WooHoo!

She’s learned “look at me” in a mostly distraction-free environment. Still, need to work on it more. And I’m impressed that she left my boots twice while outside, with wind and rain and in full-on puppy psycho mode.