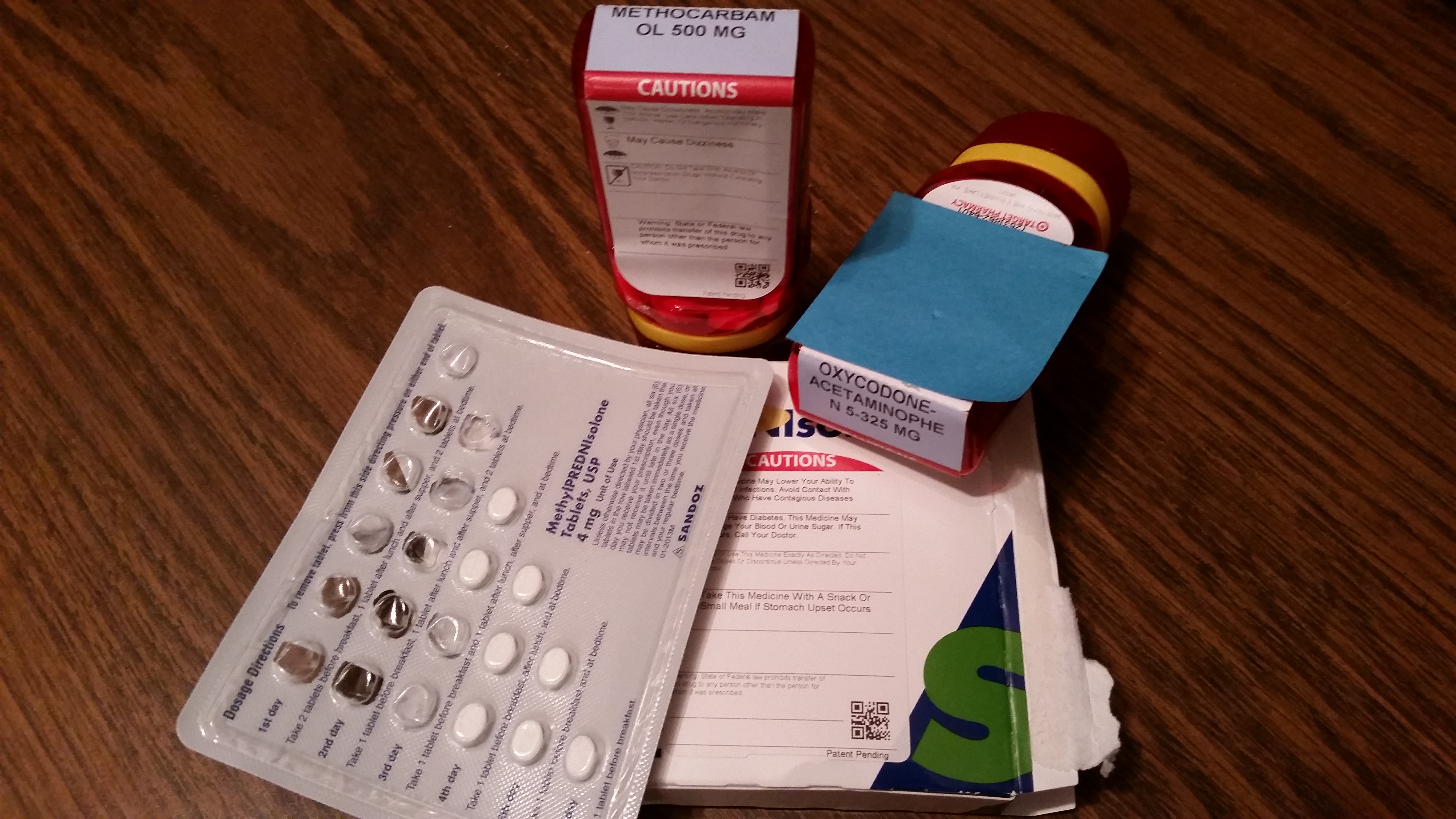 So I endured a bout of Sciatica right around Christmas. I will say muscle relaxants and pain killers make for a very low-stress Christmas.  Outside of that, Sciatica Sucks!

I don’t think I’ve ever been blase about people who’ve experienced it before, so I don’t believe this is Karma with a big chomp in the rear. However, I understood it was painful. I didn’t understand it can be downright debilitating. Seriously, I’d rather birth twins again. And I didn’t have any pain management for those boys, so that’s got to tell you something.

Long story short, I thought I was over the worst of it. I mean the doctor said it could flair up again 5, 10, 15 years from now. Once every 5 years? I can do that. I mean, I’d rather not, but as long as there is a nice long reprieve, I can do it.

Skip ahead to last week. 36 days from my first Sciatic flare-up. And holy friggin’ snotballs, why am I in pain again? I wish I had an answer, but all I can gather is my body is playing games with me.

Since I’ve been popping more meds than I’ve ever taken in my life and since I’ve been asking everyone who says they’ve experienced Sciatica how they dealt, I figured I’d share what I’ve learned.

First, let’s talk about how you know who has experienced true Sciatica and who hasn’t.

Those who have experienced it start with “Oh my God, I’m so sorry. Oh man, that sucks. So sorry.” Really they don’t have much to offer. They’ll share what they did, but they admit, it doesn’t always work. They know it boils down to pain meds and “Godspeed my friend.”

Those who may have experienced it, albeit in a lighter form, begin with a list of things you should do. They don’t wait for you to ask, they dole out the advice like they are experts. And the advice varies: Sit in a hard chair (maybe for that guy, for me that felt like the knife stabbing me in the butt tore straight up into mid-spine). Do yoga (seriously, I’m virtually incapacitated, I can’t even bend over to put a sock on, how the Hell am I going to do any pose outside of whimpering dead-man on floor?).

Then there are those who’ve obviously never experienced it, but think they have. They start with: Yeah, I’ve had that. Usually they just stop there or they up the ante with the proverbial, “I have a high pain tolerance.” This said by a mother who had an epidural with the birth of her single child. Yeah, it’s easy to have pain tolerance when you begin with pain control!

Outside of all the advice: Keep moving, see your doctor, stretch, watch your posture, take an Epsom Salt bath (you know when you can sit for 15 minutes). You will endure lectures from doctors.

To be fair the two doctors I’ve seen were very nice and sympathetic. But you will question their motives later. Let me tell you how.

My first foray to the Prompt Care Facility they gave me a shot of Toradol in my backside. It kicked in within an hour. Damn, that stuff was amazing. Sucks that it has to wear off. The second foray to Prompt Care the doctor said they’d do a shot of Toradol. She’s lucky I couldn’t hop up and kiss her, I’ve never wanted a shot in my rear so bad. The nurse came in ( my pain has been on the left side) she put the shot in my right side. I asked her, “Will that get to my left side?” she assured me it would. Three hours later with no relief I was sure I got the one nurse who didn’t know what she was doing. I called the doctor’s office. Told them it hadn’t kicked in and maybe it had to be on the left side. Since I didn’t think I could trust them anymore I did what any level headed person would do: Put in a text to the family member that is a nurse. Apparently, it doesn’t always work and no the nurse didn’t mess up. Maybe there was a reason they didn’t do the left side. Gee, thanks Sis, kind of wanted you to go kick her heiny.

Now, while at the doctor for the second time, she lectured me to get in to see my primary doctor. I already told them I had an appointment. I even told them I tried to get it moved up, but between her busy schedule and her vacation, no go. I got a few more reminders that I was instructed to go to my doctor. I’m trying, I’m not arguing, I’m really trying. This is when you feel like a little kid and your parents don’t believe you.

Here’s another thing you will learn when you have Sciatica: You will become paranoid that the doctor somehow coded the prescription for the pharmacy to give you a less effective pain killer. Yeah, not my finest moment in life. I did learn that Target Pharmacy lists who the supplier is that doled out your particular med. I did not know this until I searched my bottle over for something different from the previous container. It really doesn’t help, but just something I learned. Also, never call the pharmacy and question their medication. That doesn’t fare well. Just trust me.

Now, I’m not a druggie. Pain killers are narcotics. Since so many people misuse them they don’t give you many. In December I received 10 tablets. I made those last. I even had one left over when the second bout of Sciatica kicked in, so I used it for some much needed rest.

This time, the pain killers weren’t kicking in as quickly. I know I didn’t build up a resistance to them. Cause, again, I hadn’t been popping them as often as I was prescribed. The first round of Sciatica pain killers kicked in within a half hour. These were taking up to 2 to 3 hours. I searched online to see if there might be a defect from this manufacturer. I couldn’t locate anything, but I did come across that druggies grind up their pills to get the effect quicker.

This is sad to admit, but I took advice from a druggie. The next time I woke up in agony, I chewed a small bit from a pill and then swallowed the rest. I don’t recommend this, it tastes nastier than all get up, but I will say, it worked. Again, though not recommended, who knows what I’ve screwed up in my system by doing that.

And that’s all I know about Sciatica. Basically, not much, but figured there might be some useful bits in there for someone suffering. The useful bits being: Just go to the doctor. Don’t try to ride it out. Just bite the bullet and get to the doctor.

UPDATE: Turns out what I experienced wasn’t sciatica. After losing feeling in my leg and going through an MRI we found the culprit. I had a severe herniated disk, crushing my L4/L5 nerve root. Tried physical therapy with no success and after a few more spells of complete incapacitatedness I bit the bullet and had surgery. Happy to report, I’m back to normal.

If the pain doesn’t stop, look further there may be a different reason.