Oh my word, how come I never read this book before now? Everyone says this is such a sad story. If you don’t know any better, it has the requisite ups and bottom of the barrel depths of despair before the main character climbs back up again.  Here’s what makes it sad: The story is (loosely – although parts don’t sound that loose) based on Plath’s life. Plath committed suicide, so when you read it and know that outcome you know the main character didn’t fully make it out of the dark depths. That is where the story is heart-breaking. 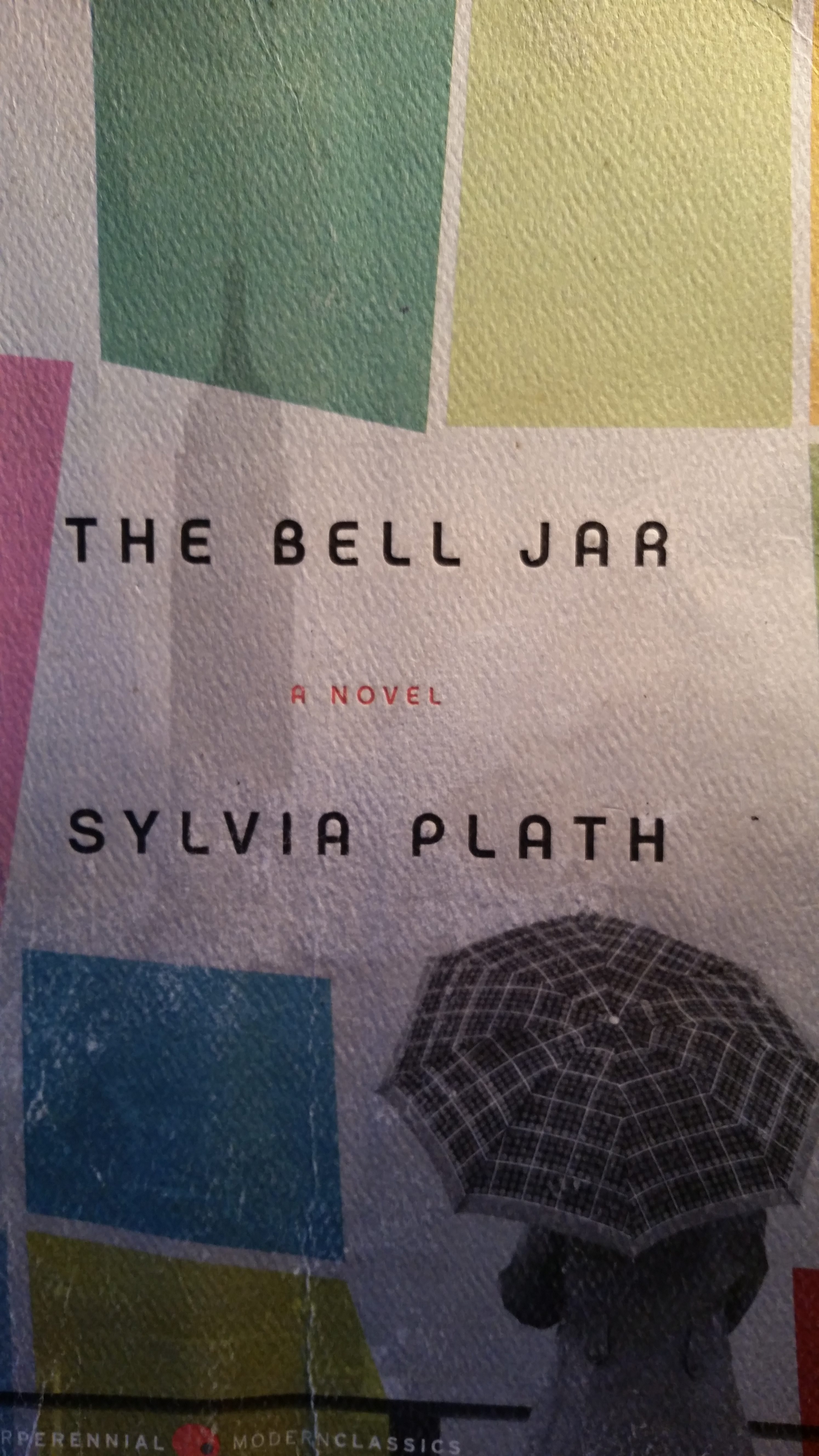 The story is told in the first person present and past tense.

Example of past to present from Pg. 3

I realized we kept piling up these presents because it was as good as free advertising for the firms involved, but I couldn’t be cynical. I got such a kick out of all those free gifts showering onto us. For a long time afterward I hid them away, but later, when I was all right again, I brought them out, and I still have them around the house. I use the lipsticks now and then, and last week I cut the plastic starfish off the sunglasses case for the baby to play with.

I guess one of my troubles was Doreen.

One sentence and yet, there is so much buried in it, how can you not want to know more?

I’d never known a girl like Doreen before. Doreen came from a society girl’s college down South and had bright white hair standing out in a cotton candy fluff round her head and blue eyes like transparent agate marbles, hard and polished and just about indestructible, and a mouth set in a sort of perpetual sneer. I don’t mean a nasty sneer, but an amused, mysterious sneer, as if all the people around her were pretty silly and she could tell some good jokes on them if she wanted to.

Example – a longer version of first person POV (and quite possibly the most amazine three paragraphs that sum up anxiety so well). Pg. 77

I saw my life branching out before me like the green fig tree in the story.

I saw myself sitting in the crotch of this fig tree, starving to death, just because I couldn’t make up my mind which of the figs I would choose. I wanted each and every one of them, but choosing one meant losing all the rest, and, as I sat there, unable to decide, the figs began to wrinkle and go black, and, one by one, they plopped to the ground at my feet.

Yeah, kind of at a loss for words. That is the kind of first person writing I want to do. Put someone in the crook of that fig tree and make them feel like they are there, they are the “I” in the story. They are doing without being told a bunch of “I climbed and sat in the fig tree. I looked up and each fig represented a life that I couldn’t decide whether I wanted or not.”

So summed up, this is the first person writing that makes me swoon. Don’t get me wrong, it doesn’t have to be literary, it just has to put me there and make me feel like I am the MC. But it has to do so with the finesse of trust that, I, as the reader understand the situation with a play-by-play run down.

This book is totally on my “Must Own List.”

A fun link: The Barbizon Hotel – this is a story on the hotel featured in the beginning of the story and also featured in a part of Ms. Plath’s life.

How do you feel about the first person point of view in this story?

NEXT WEEK: I Let You Go by Clare Mackintosh